If you’re a cat person, you know that our little furry pals are our four-pawed babies. We want what’s best for them at all times, and know that even though for us they’re as valuable as tiny little humans, their bodies don’t necessarily function like ours, so knowing what’s best for them, as well as what may harm them, is key.

Cats can (and should) eat chicken and chicken derivatives. Meat, in general, is very favorable for them, but chicken is especially high in protein which is very beneficial for their health, growth, and development. The key lies in how the chicken is prepared and not on the chicken itself.

Let’s take a look first at the very tangible, very real, and hazardous potential risks of chicken, so you understand where lies the problems with the highly nutritious poultry. Then, after we’re sure and clear of what never to do, we can move on to celebrate the wonders of chicken in our cats’ diet. Chicken No-No’s For Your Cat

As humans, we’ve been thoroughly exposed to the dangers of cross-contamination from raw poultry, especially from chicken. Raw chicken is a typical host for Salmonella, for e.coli, staphylococcus aureus, campylobacter jejuni, listeria, and can cause the very feared and dangerous toxoplasmosis (a parasitic disease especially harmful for pregnant women) among other potentially dangerous disease-causing bacteria and parasites. Can these affect cats?

Raw-diet supporters state that cats can indeed eat and digest raw meats and animal derivatives (like chicken and eggs). They wholeheartedly believe this, as nobody’s cooking any feline in the wild, any prey they just caught, and even ordinary house cats eat raw rodents they occasionally manage to get their cute little paws on. Despite this, there are several very wrong things with this logic.

First, when we talk about felines in the wild, we usually refer to undomesticated big cats, meaning lions, tigers, panthers, and such. Not a fluffy Persian, a proud Siamese, or an aristocratic sphinx. These big cats (which is literally how they’re called) are also big hunters. When in captivity (not to be confused with domestication), they are fed raw chicken given its ease of handling, but their digestive systems handle bigger game.

Domesticated cats have evolved and adapted to a household environment, including food. In hunting (which is something they’re genetically set out to do), the only prey they may commonly find is a small rodent or a bird. Can a housecat on a farm potentially have access to live birds of several kinds? Yes. Yet many of the potential risks of consuming raw chicken are not present in poultry that has been recently killed, but after it’s become infected during its processing for commercialization. This is not the case with raw eggs, as they always contain a specific enzyme (avidin) that can cause skin and coat issues as it is a natural inhibitor of biotin in cats.

In a similar train of ideas as in raw meat, spoiled chicken would be a terrible idea. That is, using meat (in this case chicken) that’s not fit for human consumption for any of the many possible reasons, and instead of discarding it, choosing to feed it to your cat. Like raw meat, all similar conditions associated with eating spoiled or discarded meat in humans would entirely apply to cats. So you better avoid a sure trip to the vet and toss that chicken that just spent too many days unfrozen in your fridge.

Bad To The (Chicken) Bones

Following suit on the raw diet movement, it should include bones, right? Prey has skin, delicious meaty flesh and organs, and, well, bones. Yet, in general, it is not recommended to feed chicken bones to any house pet, especially cats, as chicken bones can break in weird angles, splinter, break in tiny shards that could puncture some part of your kitty’s digestive system (or your dog’s, for that matter), so most cautious experts advise steering clear of bones altogether.

A few less cautious enthusiasts have some basic rules of thumb regarding feeding chicken bones to cats, based on the premise that raw food is best. Yet, commercial-grade raw food is expensive and can become unsustainable long term. From this, the most logical thing is to resort to your own available resources to provide your, which will most definitely include bones. Yet, to do this with precaution, they advise not to feed bones from cooked poultry but only raw bones (more nutrients, easier to digest, and just safer overall).

Cooked bones are even more prone to splinters than raw bones and cause obstructions, as they lose flexibility in the process of being cooked. Cooked bones are also significantly less nutritious, having fewer amounts of magnesium, phosphorus, calcium, and potassium, all of which raw bones are very rich in. That being said, the dangers greatly outweigh the benefits of feeding cooked bones to your cat, so we’d advise steering clear of taking your dinner’s leftover bones home to your cat.

Chicken is not one of the most common ingredients in processed or commercial cat food for a reason. Having talked extensively about the risks and contraindications of feeding chicken to your cat, let’s walk you through a safer, more beneficial, and efficient way to take advantage of this amazingly nutritious ingredient for your next kibble recipe. 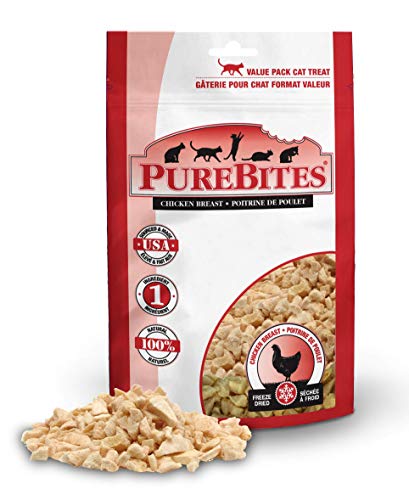 Among us humans, chicken is one of the go-to resources to consume high amounts of lean protein. For cats, additional benefits include:

Like with its chicken meat counterpart, chicken eggs that have been thoroughly cooked have many benefits for cats. Yet, as with chicken, some general rules must apply to allow your cat to benefit fully from eating this superfood by-product.

How Much Is Just Enough

As mentioned, chicken is a common ingredient in cat food as is. Yet, if feeding it directly, more than the quantity the issue is how it is fed, and whether it’s complemented to provide a healthy diet. So can your cat eat chicken every day? Absolutely and as long as you follow the guidelines included above. Should chicken be the only thing he eats every day? Hardly. If you do this, you’ll most likely encounter health problems along the way. Eggs, on the other hand, are extremely nutrition-dense. Even if cooked, feeding one egg to an average-sized cat would nutritionally translate to feeding 10-15 eggs to an average-sized human. And most evidently that would be an exaggeration. So if feeding eggs, aim for 2-3 times a week, in small portions (specially if including the yolk). 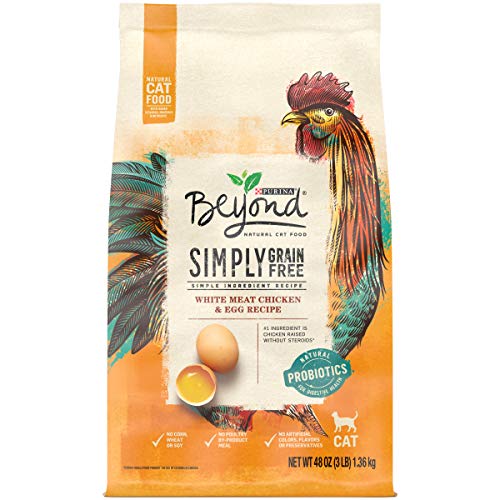 Feeding your cat chicken is not bad. Initially, even providing your cat raw chicken isn’t wrong or automatically harmful either, if proper precautions are taken (although it is most definitely not recommended overall). If you want to feed your cat raw chicken, try to make sure the meat is as fresh as possible and has been handled in the best, cleanest environment with all provisions to avoid cross-contamination that could lead to parasitic or bacterial contamination. If this is difficult for you (as it most likely will be, albeit not impossible), opt for thoroughly cooked boneless chicken. The same applies to eggs, which should be thoroughly cooked to avoid disease, food poisoning, or coat and skin problems.